Manteo was a 16th century Croatan Native American. He was the chief of a local tribe that developed a friendly relationship with the English that arrived to Roanoke Island in 1584. When the English returned in 1585, they came to late to plant crops, and with inadequate supplies. Manteo’s tribe helped them survive until they could get their own farming going. 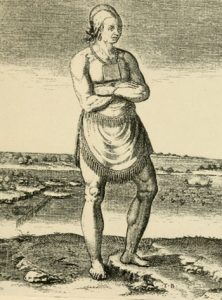 Manteo sailed to England at least twice. In 1587 he returned to the Americas from England with a group of English colonists headed by Governor John White. This group founded what we today know as The Lost Colony.

Manteo was the first Native American to be baptized into the Church of England. He was baptized on Roanoke Island on 13 August, 1587.

We do not know much about Manteo’s life before he met the English. He was born into the Croatan tribe that inhabited coastal areas of what is now North Carolina. It is possible that they were allies of the Roanoke people, or even a branch of them.

Manteo’s first mentioning in English records is from 1584 when he encountered the English explorers sent out by Sir Walter Raleigh.

When the English explorers returned back home to England after their first visit, Manteo sailed with them. According to English sources, the English had convinced “two of the savages, being lustie men, whose names were Wanchese and Manteo” to travel with them to London. The ship reached England in September 1584 and Manteo and Wanchese were introduced to the royal court, where they garnered a lot of attention, although Sir Walter Raleigh kept restrictions on who could meet the visitors. Raleigh wasn’t very interested in causing a public spectacle; instead he wanted to know as much as possible about the economic usefulness of the area where Manteo and Wanchese lived. In order to achieve this, he tasked the scientist Thomas Harriot with the job of learning the language spoken by Manteo and Wanschese – the Carolina Algonquian language.

Manteo and Wanchese lived at Raleigh’s residence in London, where they spent a lot of time with Harriot. In order to communicate with them and translate the words into English, Harriot created a phonetic alphabet. According to English sources, Manteo was interested in learning English, while Wanchese was not. Wanchese also reportedly remained suspicious of the English and declined to befriend his hosts. Eventually, he began to see himself as a captive rather than a guest.

By Christmas 1584, Harriot had learned enough Algonquian to converse with both Manteo and Wanchese. Manteo provided Harriot with a lot of information about his native region, and through him, the English got a lot of info that would come to be important for future colonization of the region.

In 1585, Manteo and Wanchese returned home, sailing with Sir Richard Grenville’s and Sir Ralph Lane’s expedition on the Tiger. The voayge was quick and Tiger reached the Caribbean in just three weeks, arriving in April 1585.

One of the members of the expedition was Harriot. Thank’s to having learned the Algonquian language from Manteo and Wanchese, Harriot became an important link between the English and the people who inhabited Roanoke Island. One of the habits Harriot picked up in the New World was smoking tobacco, and he did this before Raleigh. (Raleigh is famous for having popularized tobacco in England.)

Both Manteo and Wanchese visited England again, and both returned to Roanoke Island afterwards.

Manteo returned in 1587 on the ship carrying a group of English colonists headed by Governor John White. The aim of the colonists was to establish a permanent English colony in the New World.

On 13 August, 1587, Manteo became the first Native American to be baptized into the Church of England. The baptism took place on Roanoke Island and Manteo did not assume an English name.

In 2008, the 125th Annual Convention of the Episcopal Diocese of East Carolina approved the commemoration of the Baptism of Manteo to be kept annually on August 17.

That same year, the relationship between the English and the Croatan turned sour. Several English people had been killed, and the English decided to attack the Roanoke, who they believed were the culprits. But something went wrong and the English mistakenly killed several Croatan people, including Mateo’s mother who was the leader of the Croatans.

By the end of 1587, John White left the colony and sailed to England to fetch new supplies.

Due to the English-Spanish war, he couldn’t return to colony as planned. When he finally managed to get back to Roanoke on 18 August, 1590, he found the colony deserted. The houses had been taken down, and White could find no traces of the 80 men, 17 women and 11 children that had been there when he left Roanoke almost three years earlier. The group of English settlers that had vanished included White’s own daughter, son-in-law and Roanoke-born granddaughter.

Whatever happened in Roanoke while White was gone is shrouded in mystery, and that includes the faith of Manteo of which we know nothing.

Before White left in 1587, he and the other colonists had decided that if they colony were to move while White was gone, they would carve a message into a tree. If the decision to move was made by force, they would include a Maltese Cross in the message. Upon returning in 1590, White found the letters CRO carved into a tree, and the word CROATOAN carved on a post of the fort. Croatoan was used by the colonists as a name for boh the local tribe and a nearby island. White could find no Maltese Cross.

Because a storm was approaching, and the ship had already lost three of its four anchors, White decided to set sail for England the next day instead of trying to reach Croatan Island.