Tuskaloosa was a paramount chief (cacique) of Tuskalusa, a Mississippian chiefdom located in what we today know as Alabama, USA. His birthyear is unknown, but he died in 1540. The name Tuskaloosa means Black Warrior in the western Muskogean language. His province included a series of villages, of which most were located along the rivers Coosa and Alabama. Each village had its own chief who was a vassal to Tuskaloosa.

According to contemporary sources, Tuskaloosa was very tall, muscular and lean. Some chroniclers even claim that he was a foot and a half taller than the Spaniards.

The city Tuscaloosa in Alabama is named after him.

The main sources of information about Tuskaloosa and his people are the chronicels of Hernando de Soto’s expedition to the North American mainland. After being appointed Governor of Cuba, the Spanish King Carlos I sent de Soto to conquer the area that is now the Southern United States.

In 1539, de Soto landed near Tampa, Florida, accompanied by 600-1000 men and 200 horses. As they explored the region, they frequently came into violent conflict with the inhabitants, and they also kidnapped locals, forcing them to be bearers, interpreters and hostages/human shields.

By the fall of 1540, the expedition has reached the middle of modern-day Alabama.

The expedition reached the village Talisi on 18 September, with the paramount chief of Coosa and his sister as their hostages.

The Talisi chief and his vassals had already fled, but de Soto sent message to the chief who returned a week later, providing de Soto with what he had demanded: food, deerskins, bearers and women. This prompted de Soto to release the chief of Coosa, but not his sister.

Eventually, an envoy led by Tuskaloosa’s son arrived to Talisi. Their purpose was to gather information about the Spanish so that a trap could be set for them.

After resting in Talisi for over two weeks, de Sota and his men left on 5 October. After going through many villages, they crossed the Tallapoosa River on 9 October, and by the end of the day, they were getting very close to Tuskaloosa’s village Atahachi. When a messenger was despatched to Tuskaloosa by de Soto, Tuskaloosa responded that the expedition could go to the court whenever de Soto wanted to.

The following they, the expedition went to the village, and de Soto was brought to see the chief, who was waiting for him under a portico on top of a platform mound. Atahachi is described in the chronicels as a big, recently built, fortifed community with plaza. Chief Tuskaloosa himself is depicted as a very tall man, with his head covered by a coif resembling a Moorish almaizal, and wearing a mantle of feathers all the way down to his feet. He was seated on high cushions, and in the company of several other important men.

Some of the Spaniards began playing a jousting game on horseback, where they would gallop around the plaza, jousting among themselves, but also occasionally feint toward Tuskaloosa. This was an intimidation technique that they had used with some success before, but Tuskaloosa was unfaced. 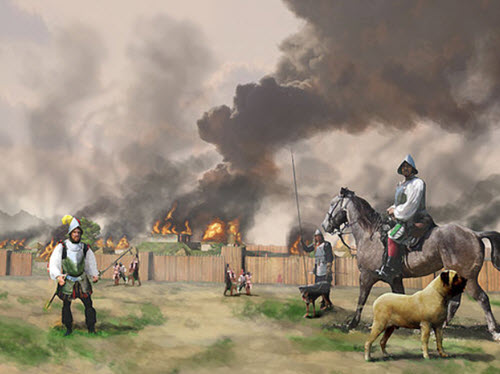 The Spaniards were served food and the Atahachi danced in the plaza. When de Soto demanded that Tuskaloosa provide him with bearers and women, the chief replied that he was used to being served and not to serve. The Spaniards reacted by taking Tuskaloosa hostage. When they started making plans to leave with him the next day, Tuskaloosa seemed to relent. The provided them with bearers, but also said that they would have to go to another town, one named Mabila, to get the women. As a thank you, de Soto gave Tuskaloosa a red cloak and a pair of boots.

The expedition left Atachaci on 12 October. At the village Piachi, the residents claimed to have no canoes, so the Spaniards were delayed there for two days while rafts were built. After rafting over the Alabama River, they noticed that two of their men were missing. Had they been taken or was there some other explanation? One of the missing men had been looking for a runaway Native American slave, and the other one was known to be fond of exploring the countryside. De Soto demanded that Tuskaloosa would have the two men found and returned right away, but the chief assured him that they would be brought to Mabila instead.

The expedition reached Mabila on 18 October. It was a small, but heavily fortifed village, located on a wide plain. Encircled by a palisade, it was protected by bastions suitable for archers to shoot from. There were no trees, bushes or even weeds growing around the settlement for as long as a bow could shoot.

Now, they Spaniards began to grow weary. They had been promised women, but the town’s people were almost exclusively adult males; young fit warriors and men of status. Some women were present, but no children at all. Also, the palisade showed signs of having been improved recently, and there were young men doing military exercises in the field, led by an older warrior.

The Chief of Mabila came out to greet de Soto, giving him three robes made from marten skins. Inside the pallisades, the expedition was entertained by singers and dancers. Tuskaloosa told de Soto that he didn’t want to continue marching with the expedition, but de Soto told him he must. Tuskaloosa went into a large house on the plaza, and when de Soto sent a man to retrieve him he was denied access.

Tuskaloosa told de Soto and his men to leave in peace. If they didn’t, Tuskaloosa and his allies would force them to leave. De Soto refused, and instead sent men into the house to get Tuskaloosa, only to find out that it was filled with armed warriors.

De Soto said that the expedition would leave if they were provided with bearers, but this demand was refused. A Spaniard grabbed the Chief of Mabila and violence broke out. A Spaniard cut of the arm of the chief with his sword, and the expedition ran for their horses and possessions. From all houses, natives poured out to attack hem, and some grabbed the Spaniards supplies and brought them into the village.

Instead of riding away, the expedition regrouped outside the pallisade and attacked the village. After carrying out numerous assaults during the span of approximatetely eight hours, the Spaniards hacked holes in the palisade and entered the village through them.

This is an English translation from the expedition’s own chronicels of the event:

“We entered the town and set it on fire, whereby a number of Indians were burned, and all that we had was consumed, so that there remained not a thing. We fought that day until nightfall, without a single Indian having surrendered to us- they fighting bravely on like lions. We killed them all, either with fire or the sword, or, such of them as came out, with the lance, so that when it was nearly dark there remained only three alive; and these, taking the women that had been brought to dance, placed the twenty in front, who, crossing their hands, made signs to us that we should come for them. The Christians advancing toward the women, these turned aside, and the three men behind them shot their arrows at us, when we killed two of them. The last Indian, not to surrender, climbed a tree that was in the fence, and taking the cord from his bow, tied it about his neck, and from a limb hanged himself.”

Tuskaloosa was not found among the dead, but his son was.

Despite being vastly outnumbered, Tuskaloosa and his allies lost the battle. One of their mistakes was trusting too much in the protection offered by their pallisade, and not preventing the Spaniards from cutting holes in it. Once the Spaniards had entered the crowded village, their opponents were not prepared to mount a succesful defense.