Weetamo (circa 1635 – 1676) was a Pocasset Wampanoag chief; the sunksqua of Pocasset. A sunksqua (male: sachem) is a paramount chief chosen by the people to represent a tribe or group of bands. 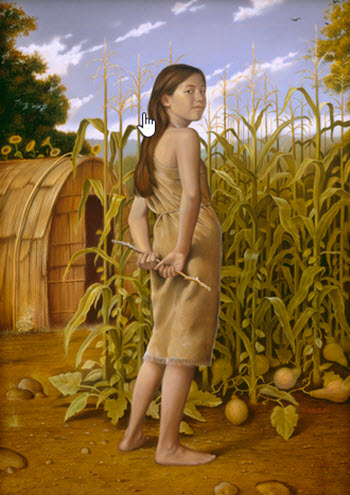 Weetamoo was born in Mattapoiset, in the Taunton River area of Rhode Island. Her father Corbitant was sachem of the Pocaseet tribe on Rhode Island, and lived in Mattapoiset in the southern part of what we today know as Swansea, Massachusetts.

In the Algonquian langagues, the name Weetamoo means ”speak to them”.

Weetamoo was the leader (sunksqua) of the Pocasset tribe who occupied what we today know as the Tiverton area on Rhode Island. She commanded an army of over 300 warriors.

In 1675, Weetamoo joined on the side of the Wampanoag chief Metacomet’s (the brother of her diseased husband Wamssuta/Alexander) in the armed conflict between Native Americans headed by Metacomet and European colonists and their Native American allies. This conflict, which lasted 1675-1678, became known under many different names, including First Indian War, Metacomet’s War and King Philip’s War. Metacomet had taken the Europen name Philip earlier because of the friendly relations between his father Massaoit and the Mayflower Pilgrims.

Weetamoo supported Metacomet, letting her army joint that of his. When the English defeated the Wampanoag in August 1676, Weetamoo tried to flee, but drowned in the Taunton River. Her corpse was taken by her enemies and multilated, and her head was displayed on a pole in Taunton, Massachuets.

Weetamoo was a skilled bead worker, quiller and dancer.

Mary Rowlandson, who was kidnapped by one of Weetamoo’s relatives in Lancaster, Massachuets, described Weetamoo as ”a severe and proud dame” who loved to wear fancy clothing and jewellry, powdering her hair and using make-up. Rowlandson also wrote about how Weetamoo used wampum and beads to make girdles. 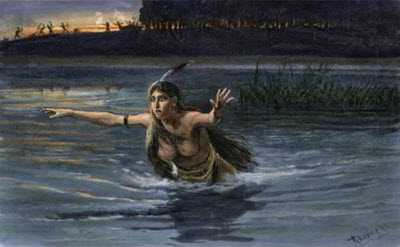 Weetamoo was married five times. Her first husband was Chief Winnepurket, the Sachem of Saugus in Massachuets. He died very soon after the wedding. Weetamoo’s second husband is also her most famous one; Chief Wamssuta of the Wampanoag, the eldest son of Massasoit Ousa Mequin. After his father’s death in 1661, Weetamoo took the English name Alexander. In 1662, the English accused Alexander of independently negotiating land sales, and marched him to Plymouth at gunpoint. In Plymouth, he died of a sudden illness, leading many to believe that he had been poisoned by the English. Some evidence indicate that Weetamoo and Wamssuta had one child together, but the date of birth is unknown.

Very little is known about Quequequanachet, Weetamoo’s third husband. Weetamoo’s forth husband, Petonowit, sided with the English at the start of King Philip’s War, which caused Weetammo to dissolve the marriage. Her fifth husband was Quinnapin, whose father and grandfather were both powerful Narragansett leaders. Together with Quinnapin, who was described as ”a handsome warrior”, Weetamoo had at least one child.

Examples of places named after Weetamoo

There is no evidence that Weetamoo ever visited the White Mountains of New Hampshire, but many places there have been named after her, such as Mount Weetamoo, Weetamoo Falls, Weetamoo Glen, Weetamoo Rock, and the Weetamo Trail. In John Greenleaf Whittier’s poem ”The Bridal of Penacock”, Weetamo is identified as being from this area, which probably explains why so many locations here are named after her.