Hąboguwįga (Glory of the Morning)

Hąboguwįga, under her English name Glory of the Morning, was the first woman described in the written history of Wisconsin, USA. She was the chief of the Ho-Chunk Nation of Wisconsin (Hocąk nation), formerly known as the Wisconsin Winnebago Tribe.

Her offspring, the Decorah family, supplied many chiefs to the Ho-Chunk Nation, and several places in the United States that are named after them. The city Decorah in Iowa is for instance named after Hąboguwįga’s grandson Chief Waukon Decorah, while the city Waukon (also in Iowa) is named either after him or after his son Chief John Waukon. There is also the town Dekorra in Wisconsin and the township Decoria in Minnesota.

The name Hąboguwįga is formed from the following components:

ho, meaning ”the time at which”

In at least one English source, a corrupted version of the name spelled Hopokoekau appears.

In most other English sources, the name has been translated into English as ”Glory of the Morning” or ”The Coming Dawn”.

Hąboguwįga was a member of the Thunderbird Clan that inhabited a large village on Doty Island, in what is now Winnebago County, Wisconsin. Her father was a tribal chief.

At some point before 1730, a small force of French troops commanded by Sabrevoir de Carrie visited the Hocągara and established friendly relations with them.

The meeting had a big impact on Carrie, who eventually decided to resign from the army and become a fur trader among the tribe. Around this time, Hąboguwįga and Carrie were married. It is unclear if she was made chief before or after being married. In the oral tradition of the Hocąk, Carrie has been remembered as a good person.

Hąboguwįga and Carrie had two sons and one daughter. Eventually, the marriage dissolved and Carrie returned to Quebec, bringing his daughter with him.

War with the Fox people and the Illini

In the violent conflict between the French and the Fox people, Hąboguwįga allied herself and her people with the French, precipitating a seven year long war with their Native American neighbors. She was instrumental in the process that eventually brought an end to the war.

Later, Hąboguwįga supported warfare against the Illini, a confederacy of roughly a dozen Native American tribes in the upper Mississippi River valley.

War with the British

When war broke out between France and Great Britian in 1754, Hąboguwįga remained loyal to the French and her warriors made continous attacks on English settlements far to the east.

When the British eventually subdued the French, Hąboguwįga refused to support the Odawa chief Pontiac in his fight against the British, and she instead worked to establish friendly relations with the British.

Jonathan Carve from Connecticut, a Yankee working for the Crown, vistied Hąboguwįga’s town in September 1766 and wrote a detailed account of her. He described her as an ancient woman, small in stature, and he noticed that her dress was pretty similar to those worn by the young women who attended her.

Here are a few excerpts from Carver’s written account:

“On the 25th I arrived at the great town of the Winnebagoes, situated on a small island just as you enter the east end of Lake Winnebago. Here the queen who presided over this tribe instead of a Sachem, received me with great civility, and entertained me in a very distinguished manner, during the four days I continued with her.”

“The Queen sat in (33) the council, but only asked a few questions, or gave some trifling directions in matters relative to the state; for women are never allowed to sit in their councils, except they happen to be invested with the supreme authority, and then it is not customary for them to make any formal speeches as the chiefs do.” 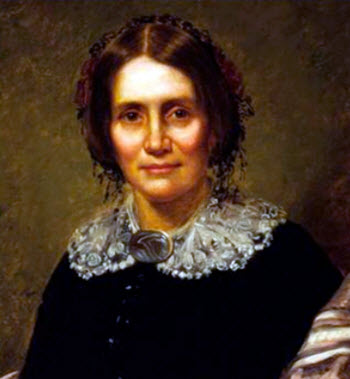 In 1832, the writer Juliette Kinzie visited Hąboguwįga, who at this point was very old and frequently to weak to stand up. Kinzie describes that her eyes were almost white, and that her voice was tremolous and feeble – except when she raised it to reprove her mischieviousgrandsons.

Here are some excerpts from her description:

“No one could tell her age, but all agreed that she must have seen upwards of a hundred winters.”

“She usually went upon all fours, not having strength to hold herself erect.”

“In spite of their vexatious tricks, she seemed very fond of [her grandsons], and never failed to beg something of her Father, that she might bestow upon them.”

We don’t know exactly when Hąboguwįga died, only that she was described as living to a very great age.

According to Hocąk lore, Hąboguwįga was out among the pines when an owl (considered a bad omen) perched near her and said her name. That night, Hąboguwįga died in her home, wrapped in furs and wih a smile on her face. There was a severe thundersnowstorm that night, a rare type of winter thunderstorm where snow falls instead of rain. According to the tribe, the sound of thunder that night was the patron dieties of her clan calling her home.

Hąboguwįga’s oldest son was Cugia. His name means spoon or ladle, and he is mentioned as Spoon Dekaury (Decorah) in some historic sources.

The younger son was named Cap’osgaga, which means White Breast. He was also known as Buzzard Decorah.

We do not know the name of the daughter, but she was taken by her father Carrie to Quebec as the marriage dissolved and raised there. She eventually married a trader named Laurent Fily.

Chief Waukon Decorah (circa 1780-1868), also known as Wau-kon-haw-kaw, was the grandson of Hąboguwįga. He was a prominent Ho-Chunk warrior and orator during the Winnebago War of 1827 and the Black Hawk War of 1832, and he is also known for representing the Ho-Chunk people during negotions with the United States government.

The city Decorah in Iowa is named after him, while the city Waukon (also in Iowa) is named either after him or after his son Chief John Waukon.

What happened to Carrie?

When the French and Indian War broke out in 1754, Carrie recived a new commission in the army. He was wounded during the Battle of Sainte-Foy and died in hospital after being brought back to Montreal.