Paquiquino, baptised Don Luís de Velasco, was a 16th century Algonquian-speaking Native American tribe leader in what’s today known as Tidewater, Virginia, USA. Sources are unclear regarding the identity of his tribe; it was possibly Kiskiack or Paspahegh. His father is believed to have been an Algonquian chief. 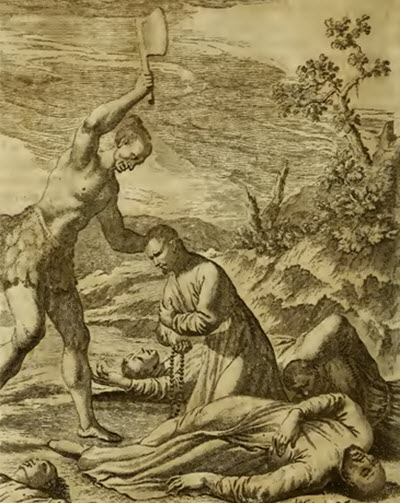 Also, we do not know his Native American name. Both Paquiquino and Don Luís de Velasco are names bestoved upon him by the Spaniards.

In 1561, Paquiquino travelled with a Spanish expedition to Spain, Cuba and Mexico. In Mexico, he was baptised into the Roman Catholic church and recived a Spanish education.

When he returned to Virginia in 1571, it was to work as a guide and interpreter for a group of Jesuit missionaries.

Later, when the region was plagued by famine, Paquiquino is believed to have participated in a massacre of Jesuits.

In June 1561, the ship Santa Catalina entered Chesapeake Bay, captained by Antonio Velázquez. They were on an exploratory voyage ordered by the viceroy of New Spain.

While in Chesapeake, the Spaniards encountered two local youths, took them onboard the ship and sailed away with them. It is not known whether the youth went with the strangers by choice, or if they were forced or tricked.

One of the youths were called Paquiquino by the Spaniards, which is a common diminutive nickname for Francis.

In September that year, the ship arrived in Seville, Spain, making Paquiquino one of the first Native Americans from the North American continent to set foot in Europe. Subsequently, he also visited the Spanish cities Córdoba and Madrid, and Paquiquino had an audience with the Spanish king while in Madrid. (This was they year when King Philip II of Spain moved his court to Madrid from Toledo.)

In August 1562, Paquiquino returned to the New World, but not to Chesapeake Bay. Instead, he went with the Spaniards to Mexico City. In Mexico City, Paquiquino became very ill, but recovered. After his recovery, he was baptized, taking the name Don Luís de Velasco, and was educated by the Jesuits.

In 1566, Don Luís went with a Spanish expedition to the Demarva Peninsula, a large peninsula that borders the Chesapeake Bay to the west and the Atlantic Ocean to the east.

From Cuba to Virginia’s Lower Peninsula

In 1570, the Jesuit priest Father Segura arrived from Havana to Ajacán, with the intention of establishing a mission there. Unlike most other missions in the Americas at this point in history, it would not be accompanied by a military garrison.

When Father Segura left Havana for Ajacán, he brought with him Father Luís de Quiros, six Jesuit brothers, a young Spanish servant boy named Alonso de Olmos, and Don Luís – who would be their guide and translator.

Ajacán, in the province of Axacan, was located near and including the Chesapeake Bay and present day Virginia, United States. We do not know exactly where the Jesuits set up their mission, but some evidence indicate that they selected the New Kent side of Diascund Creek near its confluence with the Chickahominy River.

In Don Luís native village, a small wooden hut was built with an adjoining room for the celebration of mass. 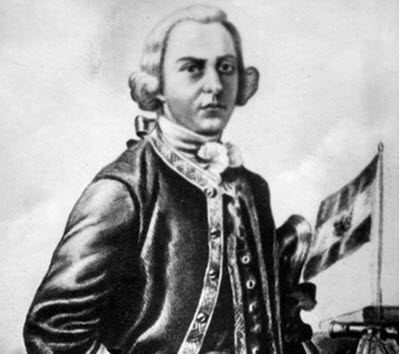 Soon after the ship that brought them from Havana left, Don Luís left the Jesuits, supposedly to locate his uncle and seek supplies for the mission. He didn’t return, and the Jesuits eventually realize that they had probably been abandoned.

During this period, the whole region was going through a long period of famine. The Jesuits had not brought much food with them, and had to trade goods with the Native Americans to survive. As the winter set in, trading became increasingly difficult due to the lack of food in the region.

Around February 1571, Don Luís returned to the Jesuits together with a group of Native Americans and stole all their clothes and supplies. All the Jesuits were killed, exepct for the young Alonso de Olmos who was spared.

When a Spanish supply ship arrived to Ajacán in the spring of 1571, they found no Jesuits, and noticed Native Americans wearing Jesuit garments and ornaments. After capturing and interrogating two Native Americans, the Spaniards found out what had happened to the mission.

In August 1572, the Spanish admiral and explorer Pedro Menéndez de Aviles arrived to Ajacán accompanied by 30 soldiers and sailors to punish the Native Americans for their obliteration of the mission.

Menéndez de Avilés used gifts to lure several Native Americans onboard his ship, to interrogate them and use them as hostiages. From them, he was informed that Alonso de Olmos had been spared and was still alive, and the admiral managed to secure the boy’s return to his fellow conutrymen.

Inititally, Avilés had thought that Don Luís’ uncle was the man responsible for the attack on the mission, but after speaking with Olmos he understood better what had happened, and attempted to use his hostages to bargain for the hand-over of Don Luís. This plan failed; Don Luís was not handed over by the tribe, nor did he hand himself in.

Eventually, Avilés decided to give up and sail away. He had the remaining hostages baptized, and then had them exectured by hanging them from the ship’s yards (the spars on the masts from which the sails were set).

In all, 20 Native Americans were killed during Avilés revenge expedition.

After this point, we no nothing more about Don Luís life, although some historians have speculated that there might be a link between him and the fierce Native American warior Opechancanough.

The failed attempt at establishing a mission in Ajacán came to have major historical consquences, since it the Spaniards did no more attempts at colonizing this region; instead leaving it open for subsequent British colonization. In 1607 the London Company established the Colony of Virginia as the very first permanent New World English colony.